Daniel José Older yesterday published an article on The Guardian’s website where he again calls for the Word Fantasy Award to be changed from its current incarnation of a bust of H.P. Lovecraft. As I have written before I completely agree with him. I don’t think it should be a bust of Octavia Butler, as I have also said before, but it should definitely not be an image of a white American man. After all it is supposed to be the World Fantasy Award is it not?

However I do tire of Older’s insistence that Lovecraft was a bad writer.

Lovecraft was an uneven craftsman at best – his stories clunk along, overburdened with adjectives and stale characters. It’s his world-building and imagination that helped solidify his legacy, but even that is tainted by a failure of craft and humanity.

No, sorry Daniel but no. Lovecraft was a spectacular writer. He knew that characterisation wasn’t his strong point and so he played to his skills. His imagination and his ability to build a sense of dread. Also, I’m not really willing to give that much credence to the artistic sensibilities of a person who claims to be an author yet is seemingly unable to use a dictionary.

[Older on the use of the word “cyclopean”] (And why… why why why does this word recur in damn near every Lovecraft story? What image are we to take from this? Buildings with a single window at the top? Buildings built by one-eyed giants? It means nothing to me visually, yet it’s clearly one of Lovecraft’s favorite adjectives.) 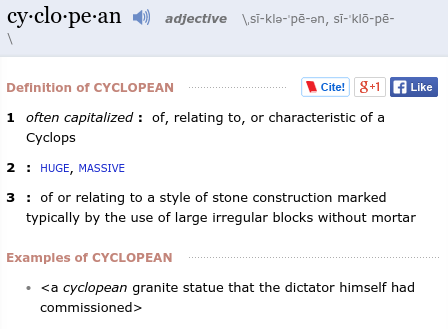 So, given the context in which the word is used, it should be fairly simple for a reader to discover quite what the author means. Hell, even before I looked the word up as a teenager I got the impression that it meant huge. When I also learned of the form of masonry, common to the Mediterranean in the Bronze Age as you ask, it added more to the story. Does Mr Older instantly discount an author who uses any words with which he is unfamiliar? In which case let’s hope that he never tries to read Shakespeare or, heaven forbid, Will Self.

He detailed his rabid, paranoid racism in many letters, and it permeates his mythos. Lovecraft peopled his fiction with hordes of swarthy, child-killing and abjectly stupid black and brown people, while women are almost non-existent.

Again, this is simply either not the case or not, completely, relevant. Lovecraft’s private correspondence does show his utterly wrong headed and vile opinions on race and class. However they do not permeate his work. They are there in some of his works (The Horror at Red Hook, Call of Cthulhu and Herbert West: Reanimator for example) but in his entire corpus they mostly feature not at all. I get the feeling that Older has not read much Lovecraft or has not done so since he was a teenager. Which would explain why only certain aspects of his work stand out in memory.

What I would argue is that Lovecraft’s bigotry (he wasn’t simply a racist) is apparent in his work in his fear that an old way of life is being wiped away by the new and emerging world. A fairly standard reactionary/right wing fear that we see reflected in the pages of The Express and the Daily Mail. The way that this fear manifests in Lovecraft’s work however is not in the explicit bigotry of works like The Horror at Red Hook but in the sense of the inevitable doom that comes with the return of the Old Ones. The fear of forces ‘outside’ civilisation that would wipe it away in a heartbeat. I would also tie this fear to the psychic rupture that was caused by the mechanised slaughter of the First World War. The war of 1914-1918 acted as a break between the old world and the new. A lot of Lovecraft’s writing, in particular his Mythos fiction, was a reaction to this break, this rupture, as was the work of many of the Modernist writers and artists.

Regardless of Older’s lack of familiarity with the work of Lovecraft, or his ability to use either a dictionary or Google, the bust is entirely inappropriate and could very easily be replaced. I just wish that folk would stop stating that Lovecraft was a bad writer and making false claims about his work. The reality of his bigotry is bad enough and needs no exaggeration.